The NOVUS NV5 is the latest hybrid piano from Kawai Japan. It joins the award-winning NOVUS NV10 in the catalogue. And in simple terms, the NV5 is the “upright”, and… Read more » 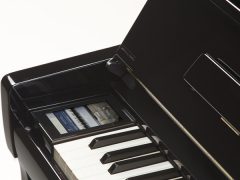 Despite a good turn-out from the piano manufacturing industry, there were relatively few actual new instruments on show at this year’s Musikmesse in Frankfurt. A wave of new pianos were… Read more »