Bösendorfer have announced a stunning new grand piano – the Dragonfly. This is the fourth in a series of special edition art-case pianos from the Austrian manufacturer. Bösendorfer will produce… Read more » 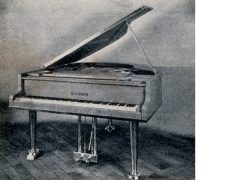 Trawling through various current eBay auction items I came across a listing for a 1936 copy of Piano-Lover, Vol.1, Issue. 2 (ends 16-December). The magazine features an article written by… Read more »

On Friday 29th September, Luigi Borgato will unveil his latest piano to the public at a special event to be held in the Palazzo della Ragione, Padova (Italy). This will… Read more »

The Pantone Color Institute has released a new standardised custom colour inspired by the purple piano Yamaha made for Prince. Pantone Inc. is an American company best known for its… Read more »