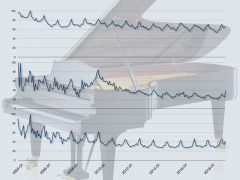 This article looks at the changes in popularity of certain piano-related search terms. To do so we’ve used Google Trends to analyse various words and phrases entered into the Google… Read more »

Resonance Piano is a new concept from the Italian company Ciresa. Few will have heard of this company but you will have heard their product. Ciresa makes piano soundboards. And… Read more »

Yamaha has launched a whole host of digital pianos at NAMM 2019. These include the AvantGrand N1X hybrid; the CP73 and CP78 stage pianos; and three additions to the Arius… Read more »

Clavia DMI have just announced that the Nord Piano 4, the latest generation of their award-winning digital Piano Series, will ship this summer. The Nord Piano first appeared in 2010…. Read more »