Casio, Korg, Roland, Kawai, Yamaha, Dexibell and other manufacturers, have recently unveiled new digital pianos. Kurzweil, a name less familiar to some, also introduced their SP1 Stage Piano at last month’s NAMM show in California. This is a “sit down and play” digital piano with an 88 note “hammer-action” (simulated) keyboard.

Ray Kurzweil established the Kurzweil company back in the 1970s. Kurzweil himself is one of the world’s leading scientists, inventors and futurists. He was a pioneer in several fields. He invented: the first charge-coupled device (CCD) scanner; the first commercial text-to-speech synthesizer; and the first commercial print-to-speech machine for the blind. He was responsible, in 1983, for the Kurzweil K250 electronic keyboard instrument, one of the first to produce sounds generated from digital samples. This instrument, developed with additional input from Stevie Wonder, was the first to accurately simulate an acoustic grand piano.

Kurzweil Music Systems have continued to produce electronic musical instrument ever since. In 1990 Young Chang (the South Korean piano manufacturer) purchased the company. And Hyundai acquired Young Chang themselves in 2006. Ray Kurzweil re-joined the company in 2007. He also continues to write best selling books on science, technology and philosophy.

Kurzweil instruments are generally seen as “high-end” products. The SP1, however, is a lower cost, entry level, stage piano.

This is generally considered to be a digital/electronic instrument that is compact and relatively lightweight. The casework of a digital home piano generally takes the form of a console, whereas the stage piano either has detachable legs or sits on a stand as part of a keyboard rig. A stage piano doesn’t usually have speakers, but is fed to external amplification, or monitored on headphones. It typically has a weighted keyboard, and as well as recreating the sound and feel of the acoustic instrument, also offers the player an array of additional sounds including organs, electric pianos (e.g. Fender Rhodes, Wurlitzer) and a range of acoustic presets (strings, brass, tuned percussion, etc.).

At just 12 kg (26 pounds), the SP1’s lightweight chassis is considered portable. Compare this to the original K250 which weighed 43 kg (95 pounds), nearly four times as much.

The focus of the SP1 is the German 9’ Artis Grand emulation, whilst there are also a range of electric pianos from Kurzweil’s Forte SE keyboard. And with 256 note polyphony, there is no chance of voice drop-out.

A useful feature is the ability to split up to four presets across the keyboard or to layer them up. Nothing new here, but the SP1’s interface makes this very easy to control. In fact Kurzweil has shied away from the menu driven control option, and gone for a much more direct on-board control button/knob approach. 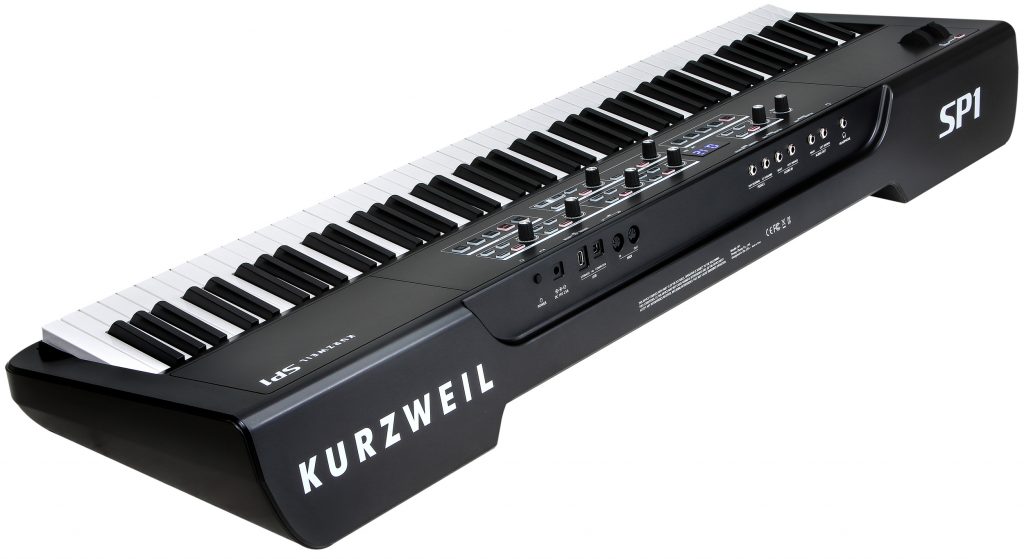 The SP1 includes both modulation and pitchbend wheels. These aren’t relevant for basic piano sounds, but can be used with other presets, or when the Kurzweil is acting as a master keyboard driving external modules.