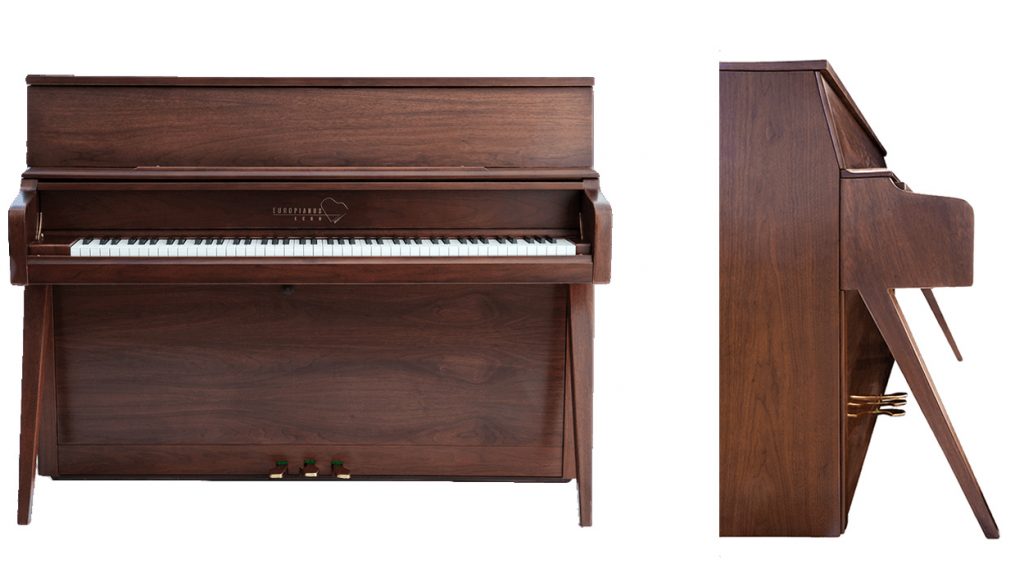 The Echo from Euro Pianos Naples, with satin walnut casework

The Echo is designed by Euro Pianos’ owner Sunny Reuter and is built in the company’s home-town of Miami. Euro Pianos Naples, established in 1965, describe themselves as, “a cutting-edge online piano boutique with a designer line of luxury grands and upright pianos”. They also distribute instruments from some of Europe’s leading manufacturers including Fazioli, Sauter, Blüthner, and Schimmel.

This is not the first piano the company have produced. They also designed and manufacture the Aire, a stunning 5’2” crystal baby grand, which can be customised to any colour/finish. 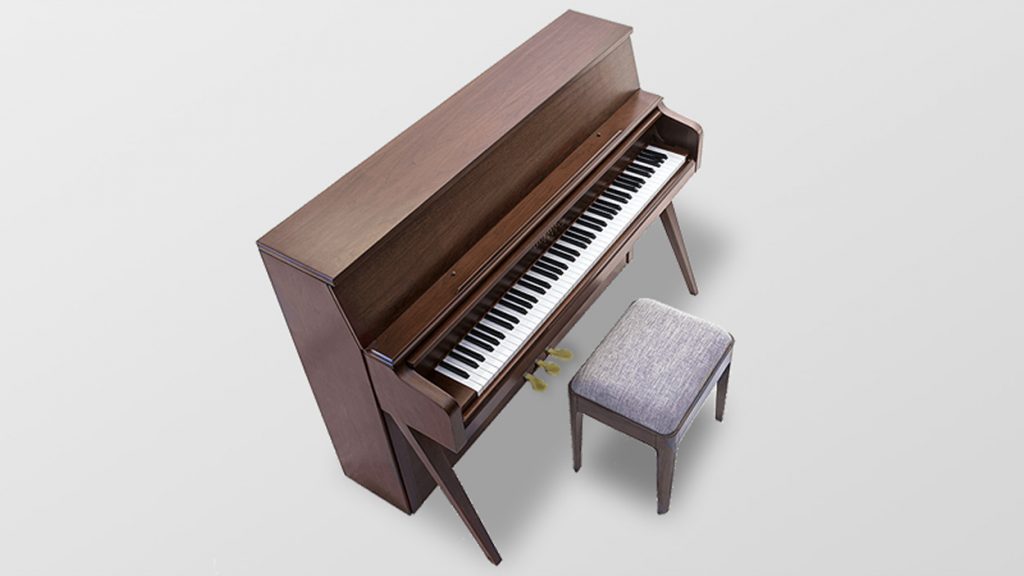 The Echo and matching stool

At just 43” tall, the Echo is a truly compact modern upright piano. The walnut casework has a satin finish and features angled legs and brass hardware.

As mentioned, the design is strongly influenced by Baldwin’s Danish modern styled Acrosonic of the 1960s, however, the Echo is a console piano, whilst the Acrosonic, on which the Echo is based, is a spinet piano.

Both these types of piano were designed to be small. This required some sacrifices – most notably in the action, the string length and the size of the soundboard. But there is an important difference between the two. A spinet piano has a drop action, with shortened keys connected by rods to the action which is located below the keyboard. A console piano has a more standard upright action.

Spinet pianos fell out of favour with the public in the 1970s. Console pianos had a more acceptable feel, and although slightly taller could be produced at a lower cost.

The Baldwin Acrosonic first appeared in 1936, and, because of its diminutive size became incredibly successful. It was once claimed that the Acrosonic was the biggest selling piano brand of all time. It was the Timex watch of the piano world. And like the Timex, its durability earned it the “it takes a licking and keeps on ticking” byline. Production of the Acrosonic continued until the 1990s.

There were many, many different Acrosonic models. In fact, Baldwin latterly used the term generically to describe their smaller uprights. It’s a bit like Toyota continuing to use “Corolla” to describe their compacts. Today’s Corollas are completely different cars to those produced in the 1960s. 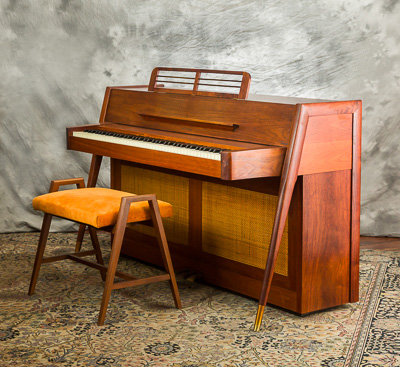 But it is the Danish modern styled Acrosonic that has become the iconic “must-have” model. The sleek lines, slanting tapered legs, and overall simplicity make this a design classic.

A few years back you could buy a fairly good one of these for a couple of hundred dollars, but now, with unprecedented demand for everything mid-century modern, these are highly sought-after and can fetch several thousand dollars.Euro Piano Naples have recognised this trend, and the Echo unashamedly reflects much that the Danish modern Acrosonic offered – beautiful styling in a sleek contemporary compact design. The Echo is slightly taller than the Baldwin, allowing for a modern direct action, longer strings and a larger soundboard. This is a piano that exudes quality and refinement.

The photo of the Baldwin Acrosonic (Danish modern) piano was  kindly supplied by Piedmont Piano Company. More images can be found here.