Schimmel Pianos recently delivered a customized, bright blue Pegasus grand piano to the 5-star Hotel Atlantis in Sanya, China. And this event provides an opportunity to take a closer look at this remarkable instrument. 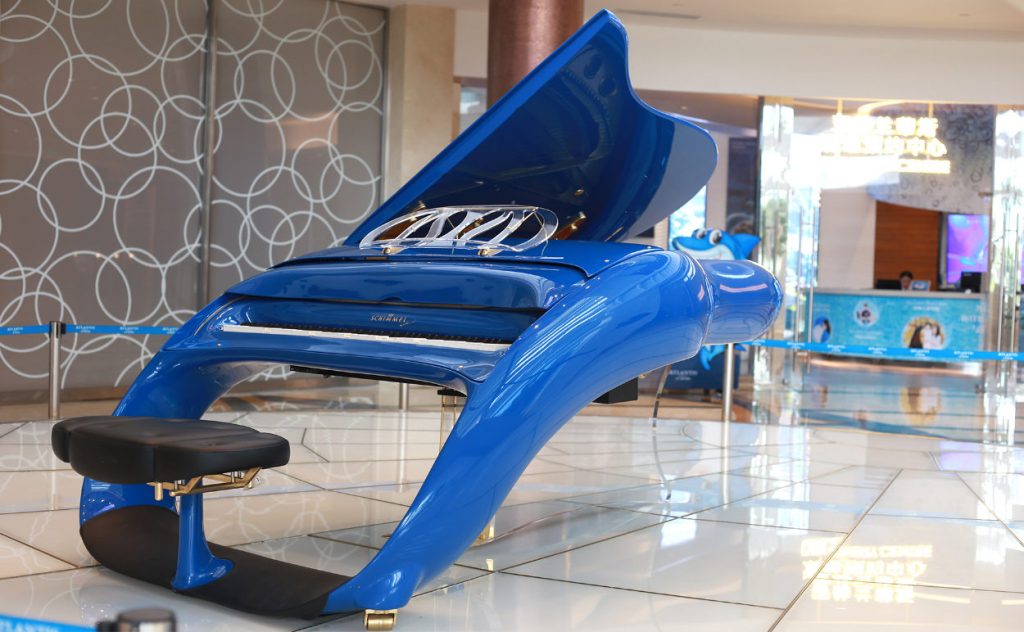 Anyone seeing one of these limited-edition grand pianos will be struck by the sensuous flowing form. The instrument strives to avoid straight lines — even the keyboard is gently curved. And it is perhaps this graceful curvacouness that makes it a perfect fit for an underwater-themed hotel.

The Schimmel K208 Pegasus was originally conceived by the somewhat eccentric German industrial designer Professor Luigi Colani (in collaboration with Nikolaus Schimmel). Colani (b. 1928) studied sculpture and painting in Berlin just after World War II, and subsequently aerodynamics in Paris. His philosophy followed that of Galileo Galilei, “…my world is round”, a distinct change to the brutalist designs of the period.

“Straight lines do not exist in nature. That’s why I believe in bio-design which uses a vocabulary whose inspiration comes from organic shapes with their violence and sensuality.”

This ideology led Colani to the remarkable shape of the Pegasus piano. He also designed cars, furniture, household objects, jewellry, boats, aircraft and trucks, and for which he won many awards.

The first Pegasus piano appeared in 1997. For 150 years the shape of the traditional piano (both upright and grand) had changed little — Colani was keen to address this. However, the Pegasus’ unique design initially generated a polarised reaction. Some considered it “a fanciful frivolity”. But over time the piano has generally become recognised as a “design classic”. 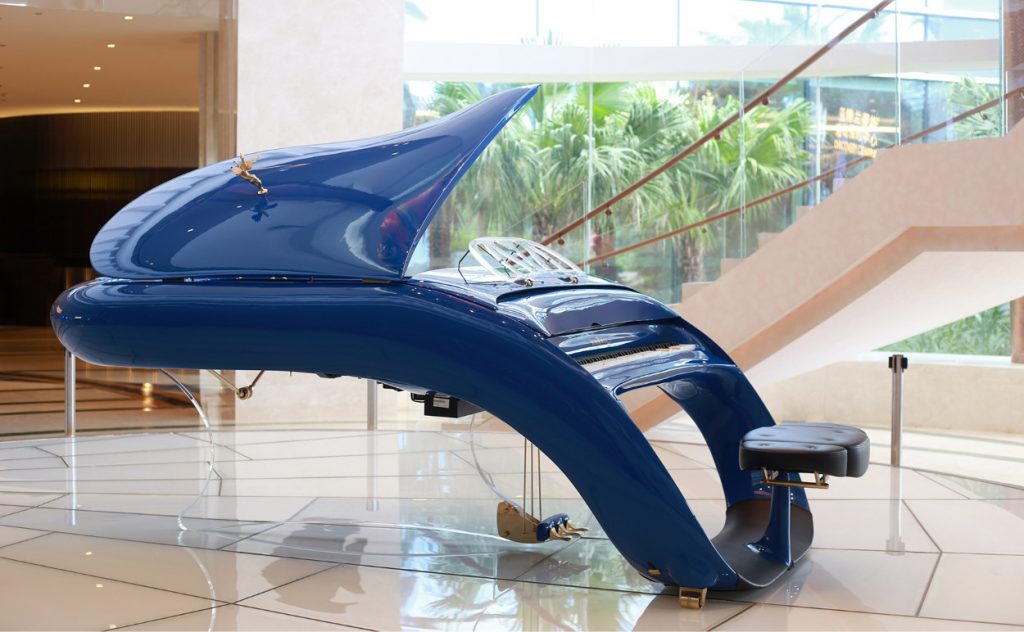 The piano is supported by an almost invisible, transparent, plexiglass panel.

The Pegasus, which is essentially a 6ft 10in (208cm) grand piano, has a somewhat organic shape, and incorporates a stool in its “one-piece design”. Virtually no other piano has integral seating. This is because pianists all have different height and position requirements. Colani addresses this by making the stool extendible in width, and the height and distance from the keyboard are both fully-adjustable.

The Pegasus has no legs (in the traditional sense) and appears to float on a clear scalloped plexiglass panel. The body is made of fibreglass and suggests a single continuous wave.

The piano features an electrically operated and fully adjustable hydraulic lid adorned with a gold figurine of the mythical winged horse Pegasus. Otherwise, the mechanics of the instrument are akin to the premium Schimmel Konzert Series grand pianos.

The Chinese conglomerate Fosun Group is behind the newly opened Atlantis Sanya. The resort is based on the successful Atlantis and built on the theme of the lost city of Atlantis. It comprises a themed hotel, water park, aquarium, shopping centre, and top-quality performance areas. Fosun is said to have invested US$1.54 billion in the project.

In Greek mythology, Pegasus is said to be the son of the mortal Medusa and Poseidon (god of the sea). Atlantis was the domain of Poseidon. And Pegasus’ brother Atlas was the first king of Atlantis (which actually means “island of Atlas”). It is therefore rather apt that the Schimmel Pegasus was chosen to feature at this resort.

The piano, with its elegant fluid appearance, compliments the complex’s oceanic theme. It can be found in the hotel’s shopping mall.

Wilhelm Schimmel Pianofortefabrik GmbH is a German manufacturer of grand and upright pianos and based in Braunschweig, Germany. They have been producing instruments since 1885.

Schimmel build no more than two of these instruments each year, and only to order. Many user options can be specified, and this makes each piano unique. An extensive range of high-gloss finishes are available — Ferrari Red is possibly the most stunning colour.

Update: 17-Sept-2019: Sadly, within hours of publishing this article, it was announced that Luigi Colani died in Karlsruhe, Germany on Monday, September 16 from a serious illness. He was 91.

Last year he talked about death, “I come from a family of people who live to be a 100. Why should I think about dying when there are still so many questions in life that have remained unanswered?”

Thanks to Rob Kiddell for bringing this sad news to our attention (see Comments below).