In 2009 the Alexander piano was, arguably, the largest piano in the world. It was build by Adrian Mann in a friend’s farm shed in Dunedin, New Zealand. Incredibly Mann was just 20 when he completed the instrument. 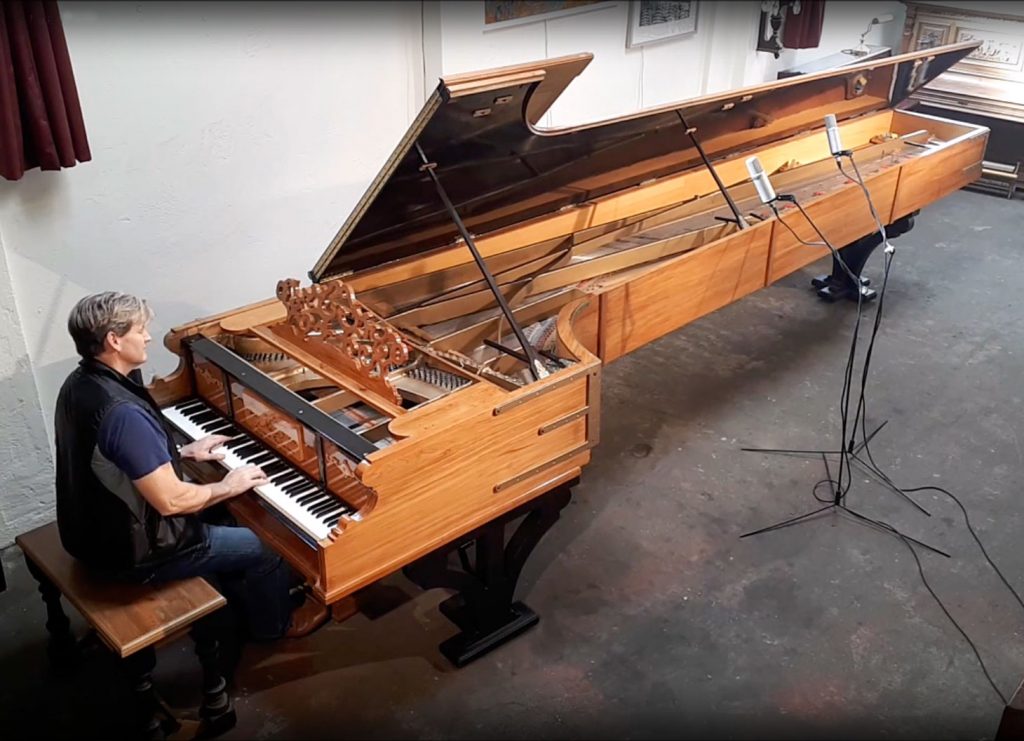 Hyperion Knight at the Alexander piano

Daniel Czapiewski’s “Stolëmowi Klawér”, in Poland, officially holds the title of “The World’s Largest Piano”, but the Alexander piano can still claim to be the world’s longest single manual piano.

Mann first had the idea to build the Alexander piano (named after his great-great-grandfather) at the age of 15. Following a visit from the local piano tuner, Mann became intrigued by the workings of the instrument. One thing he noticed was that the copper wound bass strings sounded different to the other strings. He discovered that larger pianos with longer bass, and fewer wound, strings had a much better tonal quality.

The epic proportions of the Alexander piano

Mann experimented with long pieces of piano wire to see if it was possible to use only non-wound strings in the bass section, but discovered that he would need to incorporate strings over 20 feet long. However the non-wound strings sounded fantastic, and Mann knew he wanted to build a piano that could reproduce that sound.

Four and a half years later, and with a combination of “learning, sheer determination, knowledge, luck, and sometimes pure coincidence!” Mann completed the massive 18′ 8″ (5.7m) instrument. At that time it was (probably) the world’s largest piano. He states that he rarely sought advice from piano technicians, and quotes one as saying, “I’m glad you never consulted me, I would have told you to stop.” More information on the construction process can be found on the Alexander piano website.

The piano is generally considered to be a triumph. It has been widely reported on by the world’s media. It has been recorded, and toured around New Zealand, wowing everyone who sees and hears it (including hardened professionals). Mann currently runs a piano business (sales, tuning, restoration etc.) in Dunedin, and the Alexander piano now resides in the company’s showroom.

None of the above, is news. However Mann recently announced he intends to build the Alexander Piano 2 (possibly to be called the “Adrian Alexander Mann” piano). Totally inexperienced when he started the first instrument, he now wants to take the concept much further. He intends to develop new string scaling, a new design of soundboard, and to employ more modern techniques and materials. He knows he can now create an instrument that will sound and play even better.

To fund this project, Mann is asking for donations. A piano comprises over 10,000 individual components. Every $10 NZ ($7.00 US, £5.25, €6.00) donated will buy a part for the piano, be it “a centre pin bushing to a lid, and everything in between!” Donations, of any size, can be made on the Alexander Pianos website, and the name of every contributor will go on the list of parts.

Donate, and you will be able to say you’ve helped build one of the world’s greatest instruments.

One thought on “The World’s Largest Piano Mk.2?”