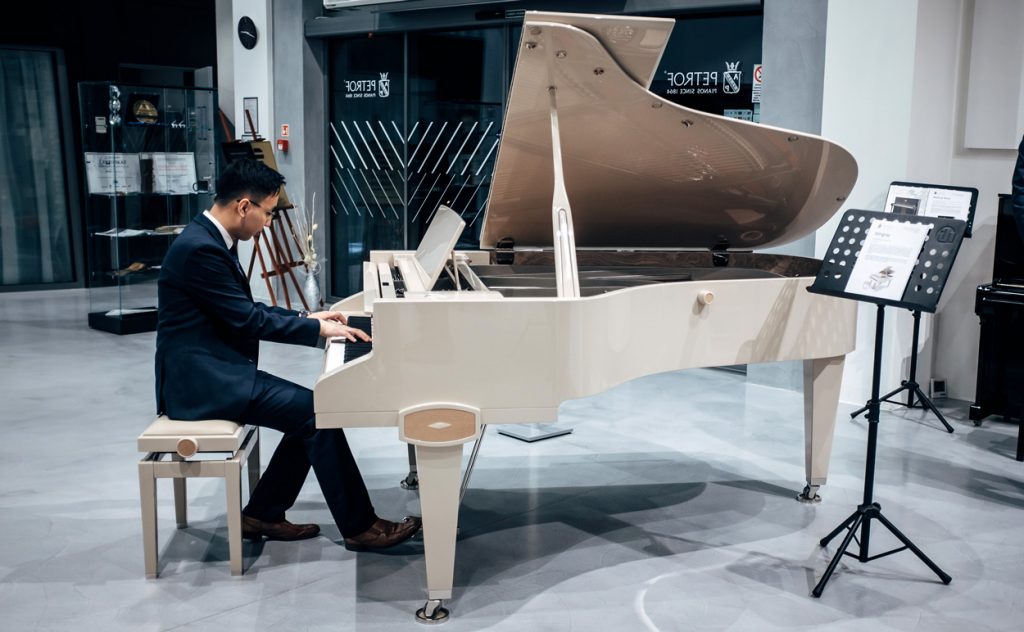 Petrof is still based in its original hometown of Hradec Králové in the Czech Republic (Czechia). It is now the largest producer of acoustic pianos in Europe. Over the decades, Petrof has made in excess of 630,000 pianos.

The three new instruments, known as the Jubilee pianos, were initially shown at the Frankfurt Musikmesse this April. And a couple of days later they were at the centre of Petrof’s special anniversary event back in Hradec Králové. Here, over 150 dealers, distributors, artist and suppliers, from more than 50 different countries attended the celebrations. 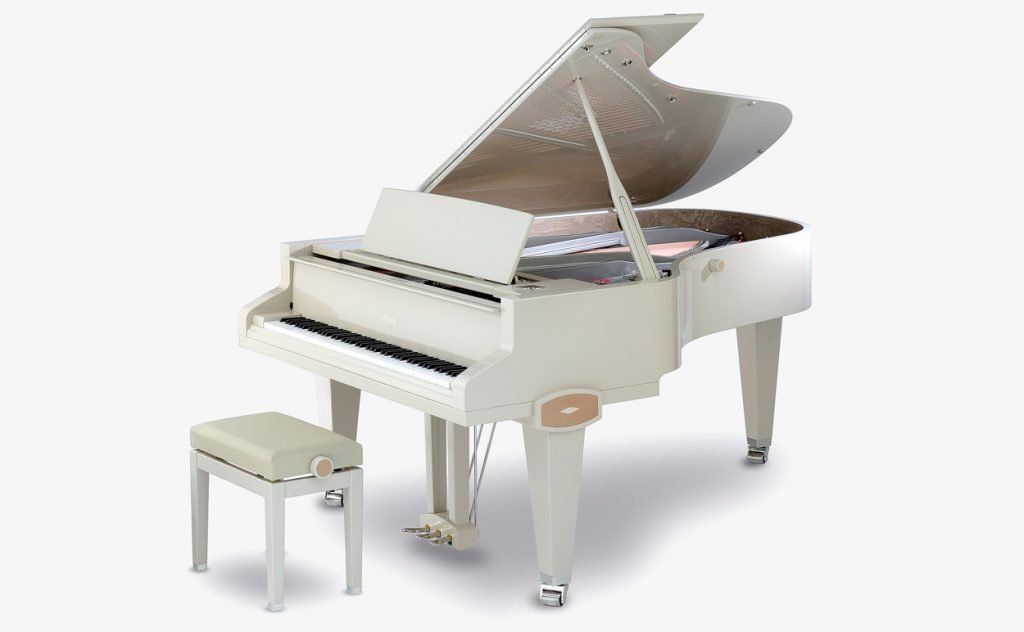 The Stingray is based on the Petrof P 210 Pasat — the company’s best selling grand piano — and is a “one-off”.

The dominant design motif is the shape and decoration of the piano’s legs. Pieces of coloured stingray skin are used as an inlay at the top of each leg. The diamond device is made from the skin on the ray’s back, and like a fingerprint, is unique to each fish. Stingray skin is a very hard durable material, its appearance resembling small tightly-packed beads. 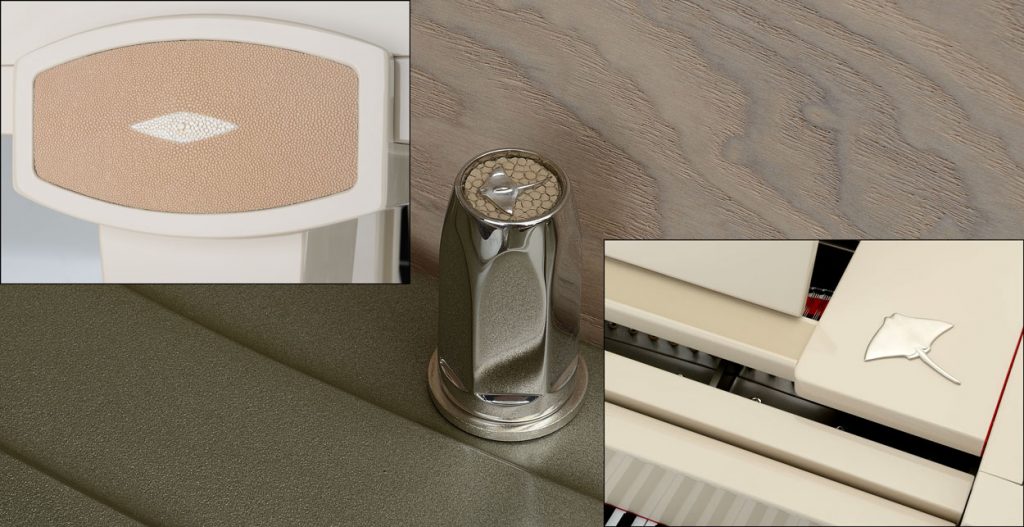 Close-up of a decorated leg, frame bolt, and music rack from the Stingray grand piano

The highly recognisable Stingray shape also appears on certain hardware elements of the instrument, such as the plate bolts, and on the music shelf to the right of the rack. 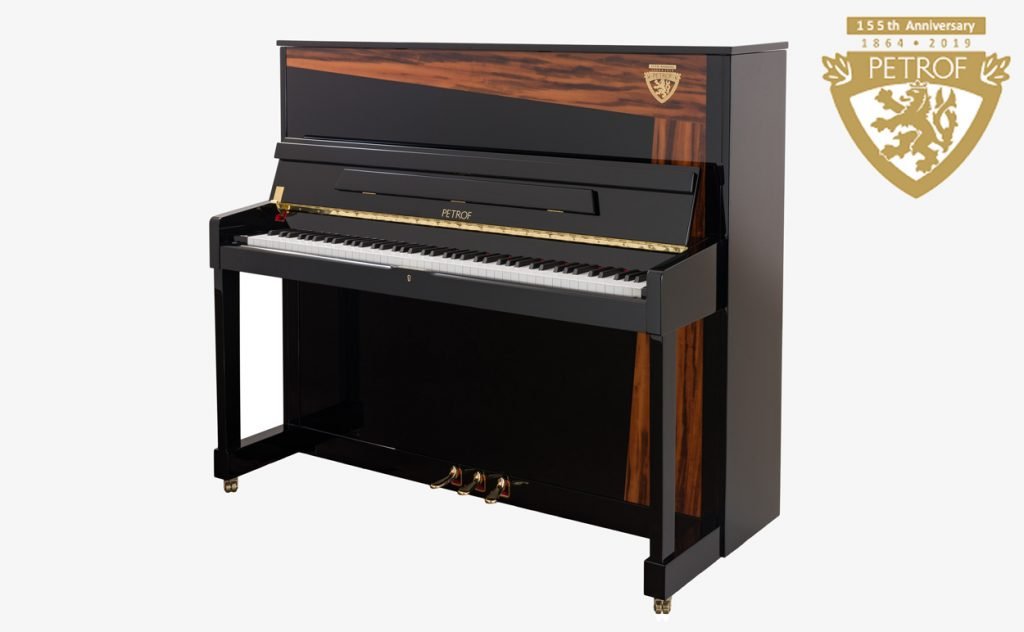 Petrof’s P 125 M1 is their most popular upright, and the celebratory instrument introduces a special tiger wood inlay to the instrument’s casework.

Goncalo Alves (more popularly known as tiger wood), is a relatively abundant exotic hardwood. It has a strong orange base colour with a spectacular dark-striped grain. And it’s the obvious resemblance to tigerskin that gives it its nickname.

The grain also has the look of the flames of a fire. By virtue of its durability and appearance, tiger wood is often used for flooring. It is also a desirable material in the manufacture of high-end furniture, jewellery boxes, and billiard/snooker cues. Sliced veneers are often used in architectural panelling.

Here the wood gives the piano a rich contemporary appearance. The special 155th Anniversary motif also features on the instrument. 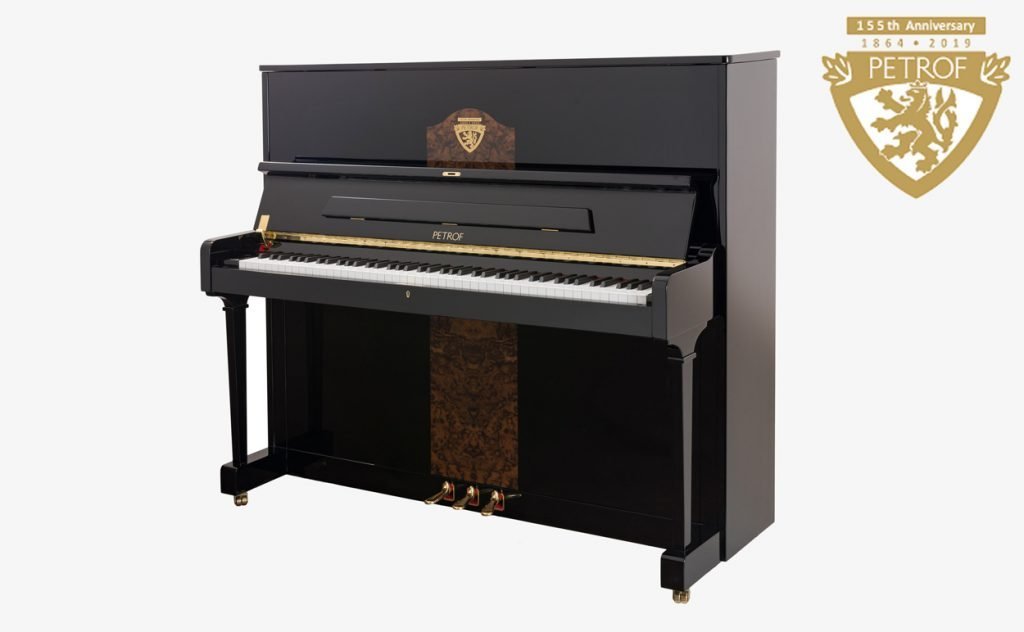 Again, this piano is based on the Petrof P 125 M1 upright. and features a walnut burl veneer inlay.

Walnut burl is a popular material amongst woodworkers and cabinet makers. No two pieces of the wood are alike, as the complex and beautiful grain patterns can vary widely. Every end-product is therefore unique. Walnut burl is also used for car interiors, stringed instruments (guitars and violins) and for gun stocks, amongst other things.

A simple walnut veneer on the front face of the piano is again overlaid with Petrof’s special anniversary emblem.

Petrof will be holding a special celebratory open day for the general public on September 7th, 2019.