On 13 May 1787 eleven ships left Portsmouth harbour to establish a penal colony in Australia. Some eight months later the vessels arrived at Botany Bay and this became the first European settlement in Australia. These ships became known as the First Fleet. 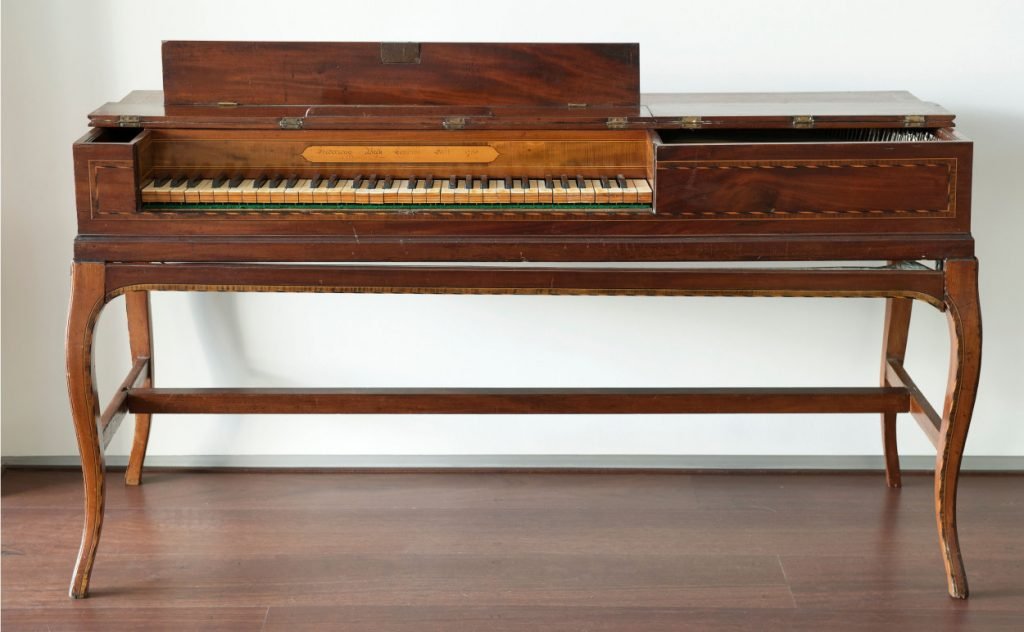 The First Fleet piano with its unique hinge-legged stand

Two of these were the Royal Navy escorts HMS Sirius and HMS Supply. HMS Sirius carried a small square piano, owned by the ship’s surgeon George Worgan. This, not surprisingly, was the first piano ever to reach Australia.

Whilst in Australia, Worgan gave piano lessons to some of the settlers. And, before returning to England a few years later, he donated the instrument to one of his students – an Elizabeth Macarthur.

Not only did the piano, known today as the First Fleet piano, somehow survive the initial gruelling ocean crossings with all the inherent changes in temperature and humidity, but it also managed to endure Australia’s blistering heat for the past 230-odd years (just!).

However, the instrument has deteriorated badly. The soundboard is cracked and warped, and the mahogany casework is suffering from woodworm. And that’s just the start.

Next year (2020) marks both Beethoven’s 250th birthday, and the 250th anniversary of Captain Cook’s arrival in Australia. And, such is the importance of this instrument to Australia, that it was felt that the piano should be comprehensively restored so it can feature in the forthcoming celebrations.

Australia suffers from a lack of expert piano restorers. So in March this year, the First Fleet piano was carefully packaged, and returned to the UK (courtesy of Emirates SkyCargo) for critical restoration.

Bath-based expert Lucy Coad is in charge of the work, but the renovation will also form part of a study for a Masters student from Edith Cowan University. They will research and capture the process and skills involved in restoring a historic musical instrument. And hopefully, the knowledge gained might enable future work to be carried out back in Australia.

This is a very old instrument. The very first piano (a grand) appeared in 1703, and the first square piano in the early 1740s. This instrument was produced by (Arnold) Frederick Beck in 1786. However, it is possible that it was actually made in 1780.

Beck was a member of the possibly mythical “Twelve Apostles”. These were supposedly a group of continental piano manufacturers who had become refugees following the Seven Years War in Germany. Beck actually arrived in London from Paris in 1756.

The faded inscription on the nameboard of the Beck square piano

* The folding stand of this instrument is unique amongst English square pianos of this period.
** As the inscription is somewhat faded, and the calligraphic style inconsistent, the date could be construed as 1780. The absence of a serial number supports this theory.

The First Fleet piano now forms part of the Founding Pianos collection at Perth’s Edith Cowan University (ECU). The collection currently comprises over 150 historically important keyboards, some of which are also the United Kingdom for restoration.

Professor Geoffrey Lancaster, from the Western Australian Academy of Performing Arts, is a leading authority on the First Fleet piano. In 2015 he published the definitive academic work on the instrument entitled “The First Fleet Piano — A Musician’s View”.

Prof. Lancaster has coordinated the restoration project, with additional support from David Wheeler (Conservator of the Royal Collection Trust); the Fazioli family, and the Horniman Museum.