Trawling through various current eBay auction items I came across a listing for a 1936 copy of Piano-Lover, Vol.1, Issue. 2 (ends 16-December). The magazine features an article written by Dr Rudolph Blüthner about his trip on the first flight of the Hindenburg to North America. It includes details of the grand piano, designed by his company, that was on-board. 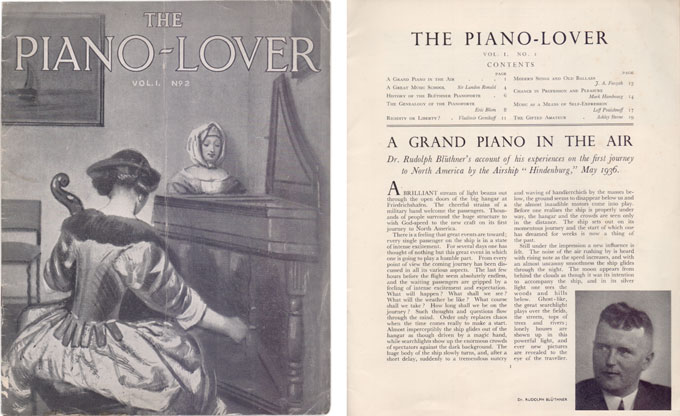 I’ve been looking for an excuse to write a piece on the Hindenburg’s piano for some time… and the appearance of this magazine on eBay is as good a reason as any! It goes without saying that pianos are heavy things, so it seems a bit incongruous to put one on board an airship, when reducing the payload weight is a prime consideration.

The Hindenburg airship was designed to carry 50 passengers in private cabins at a then impressive airspeed of 78 miles an hour. So a journey across the Atlantic took around 2 days, depending on the prevailing winds.

The operators, the Zeppelin company, felt it essential that their wealthy passenger were entertained en-route, and so the Hindenburg was fitted out with a music salon, complete with the aforementioned grand piano. 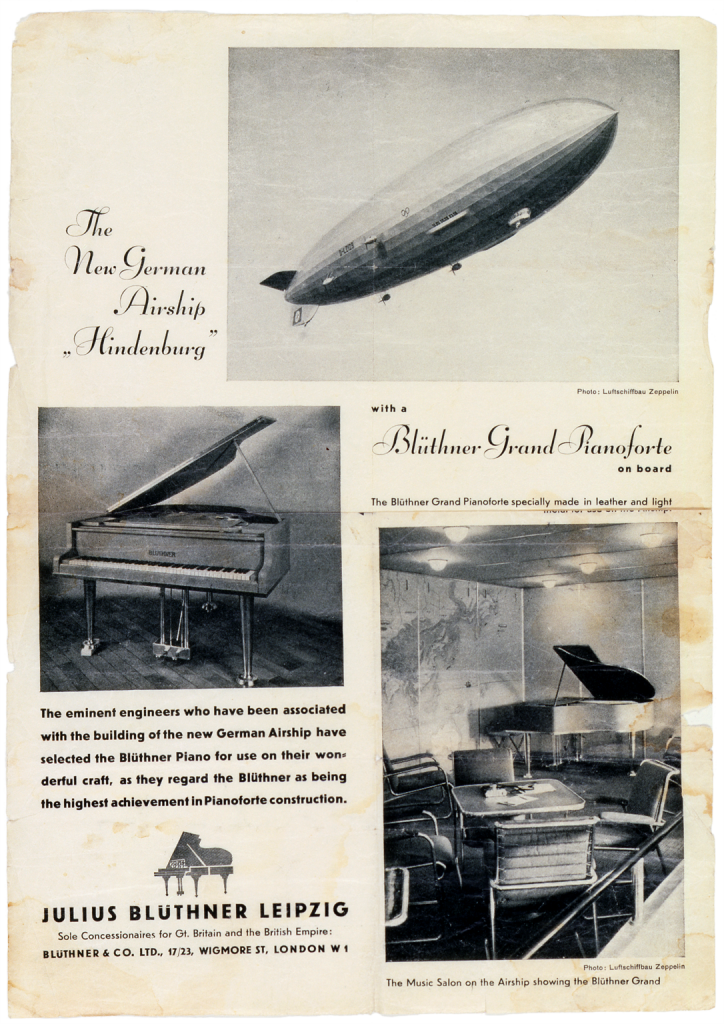 Zeppelin commissioned Julius Blüthner Pianofortefabrik to make a lightweight piano for the airship. The instrument was designed for a small intimate audience, so it didn’t have to be very loud. The strings could therefore be thinner and held under reduced tension. This, in turn, meant that the frame, usually the heaviest part of the piano could be made out of duralumin (a hardened aluminium alloy).

The rim, fallboard and lid were made of the same material, whilst the legs and lyre were made of duralumin tubing. Much of the Hindenburg’s structure was also made from duralumin. The piano was finished in pale pigskin, and weighed just 162 kg (356 lbs). A baby grand typically weighs 225 kg (500 lbs).

Despite the compromises to weight, the piano was reported to have a surprisingly large and full tone. This was the first piano ever carried on a commercial aircraft.

The above video clip of the airship’s Blüthner piano is thought to have been made in a mock-up of the Hindenburg’s music salon, and not whilst airborne. Nevertheless it does give an idea as to the piano’s sound.

The Hindenburg crashed at Lakehurst New Jersey in 1937, but the Blüthner piano is now thought not to have been on that flight. It had been taken off the airship earlier in the year and put on display at Blüthner’s headquarters. Sadly it was subsequently destroyed in an air raid, along with the Blüthner factory, some six years later.