Cole Porter’s famous piano, which he himself named “High Society”, has been meticulously restored by Steinway and Sons. This is the instrument on which Porter wrote many of his most popular songs including “Anything Goes”, “I Get a Kick Out of You”, and “I’ve Got You Under My Skin”. 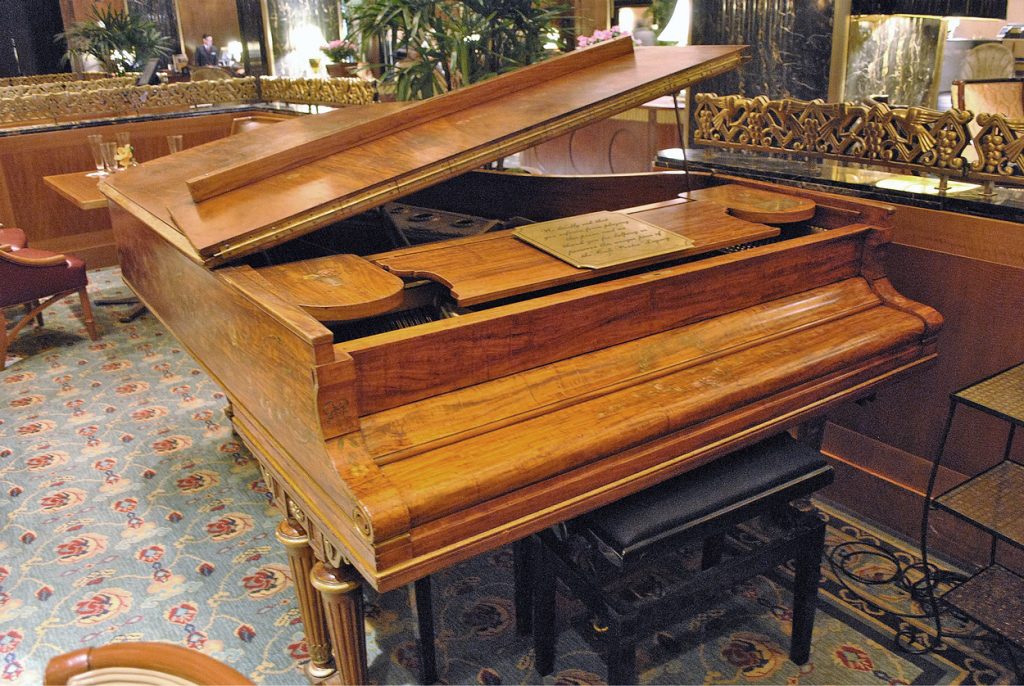 The “High Society” piano in the lobby of the Waldorf Astoria New York. Photo: Elisa.rolle

For nearly 30 years, Cole Porter had an elegant six-bedroom apartment on the 33rd floor of the opulent Waldorf Astoria Towers Hotel, New York.

The hotel management actually presented the world-famous composer with this piano shortly after he moved in. It was 1934, and this was then the tallest and one of the most prestigious hotels in the world.

The Cole Porter piano is a Model B (serial no.129281). Steinway built it in 1907 at their Park Avenue factory (just a couple of blocks away from the hotel). Unfortunately, there is no record of the original owners — just a delivery address in West 81st Street. 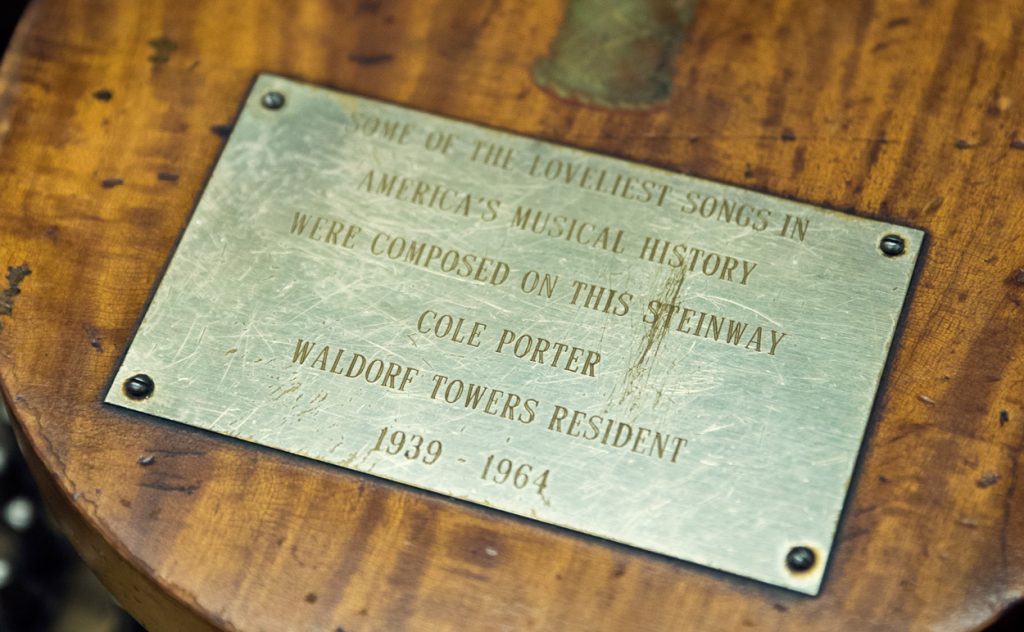 The commemorative plaque mounted on the right end of the music desk.

This art-case piano is intricately finished. Double Empire-style legs support the casework which features scrolling floral imagery and a richly decorated lid. Painted by British artist Arthur Blackmore, it shows a group of partying courtesans, dressed in Regency attire, in the garden of a European country house.

The Steinway Model B “Music Room Grand” was first introduced in 1878. Originally this model had an 85-note keyboard, but towards the end of the century, the compass was extended to 88 notes. Measuring 6ft 11in in length, this model is ideally suited to larger homes, teaching studios, and mid-sized venues. Steinway continues to produce the Model B to this day.

Cole Porter died in 1964 at the age of 73. The piano was subsequently moved to the hotel’s lobby where it became a famous fixture, regularly played by house pianist Daryl Sherman. However in 2017, the hotel closed for major renovations, and the piano was put into storage.

The hotel will re-open in 2021. And the new owner Anbang Insurance Group has decided to display many of the hotel’s historic collection of artefacts, including the Cole Porter Steinway, in the newly renovated public areas. But the piano required major attention. So in 2018, it was sent back to the Steinway factory in Astoria (Queens, New York). 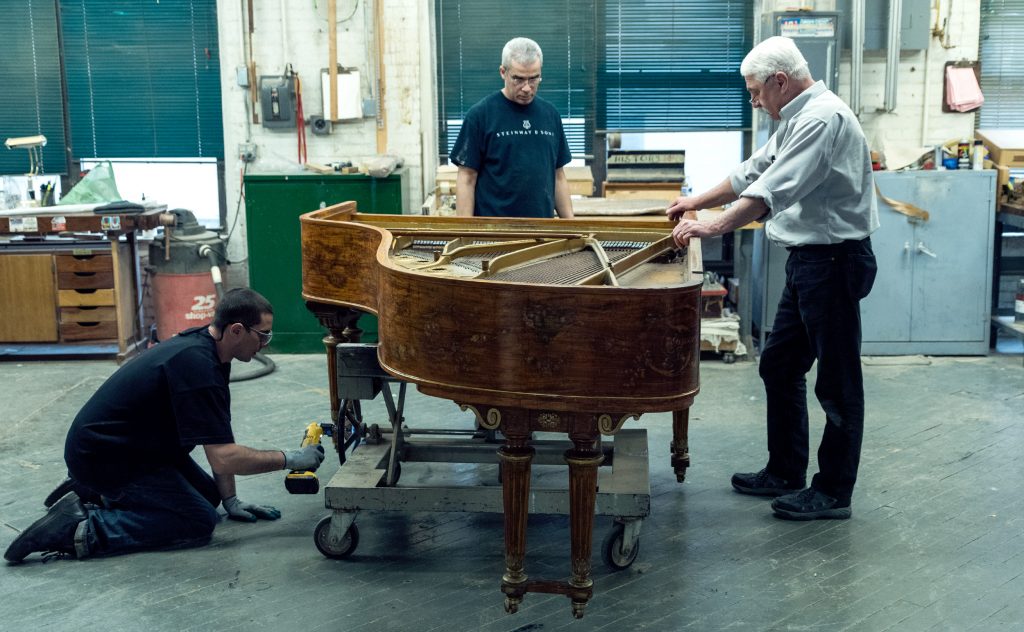 At the Steinway and Sons workshop in Queens, New York

Here Steinway’s top technicians fully restored the interior of the instrument, bringing the piano back to its original playing condition. But the exterior casework, with all the chips and scratches it received over the years, was left untouched. This was to retain the visual character of the instrument.

Interestingly, 15 years ago Steinway built an exact replica of the “High Society” piano to illustrate how the instrument would have looked when it was first built. 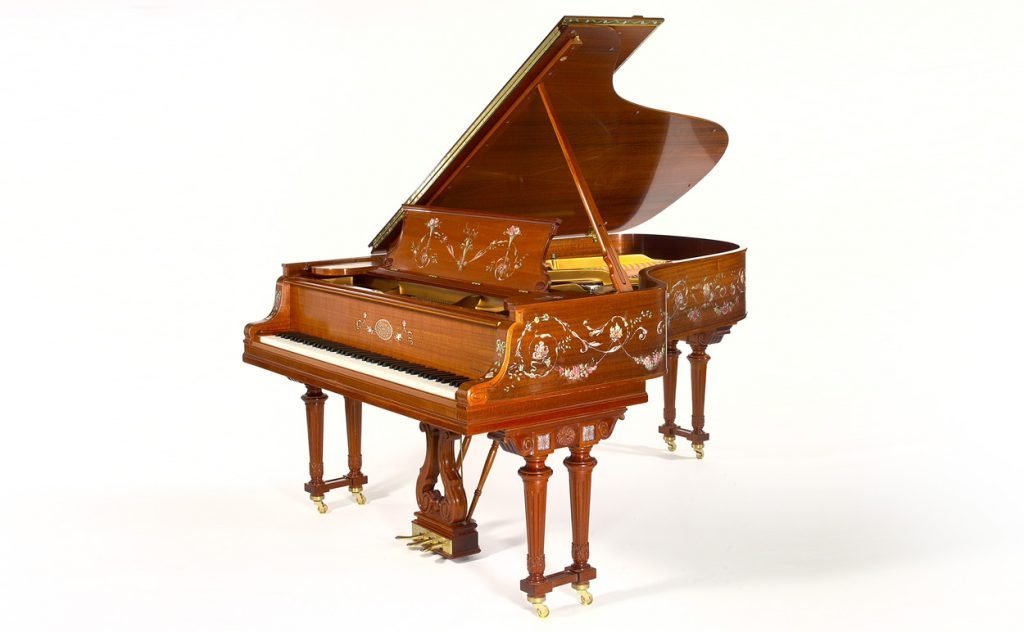 The restoration of Cole Porter’s Steinway is now complete, but the hotel isn’t. So, the New-York Historical Society is providing a temporary home for the instrument. And it can currently be seen and heard at the museum’s Central Park West / 77th Street premises.

Photos: Steinway and Sons / Ben Salesse for Noë and Associates