Over the years there have been many accessories produced for the piano. We’ve seen automatic page-turners (for sheet music), gloves with weighted fingers (to increase finger strength), hydraulic piano lid lifters, etc., but the weirdest of them all is most definitely the piano baby. 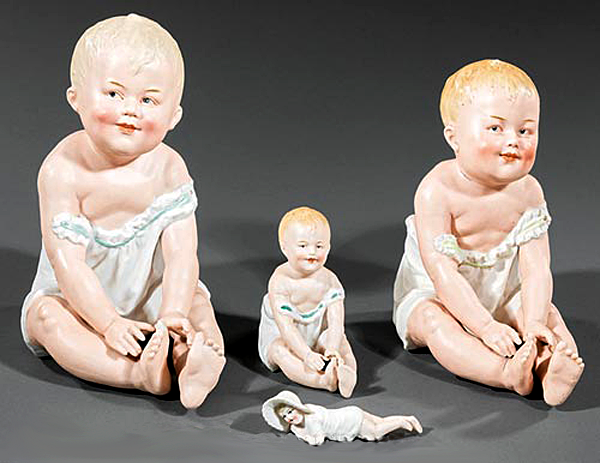 At the end of the 19th century, your piano was your pride and joy, and to keep it dust-free one would cover the instrument with a shawl or large piece of material. And, to hold this cloth-covering in place, a large porcelain baby was used. Strange, but true.

These figurines are typically 8-15 inches high, and, originally, mostly made in Germany. They can be found in all manner of poses. Annette Hahn’s Pinterest site features a wide range of examples.

Piano babies remained popular up until the First World War. Nevertheless, Japan started manufacturing reproductions in the 1950s, and they enjoyed a resurgence amongst collectors in the 1980/90s.

Most piano babies are made from bisque, which has a matt surface, and is also known as ‘biscuit porcelain’. The most famous manufacturer, and probably the best, was Gebrüder Heubach (Lichten, Germany), and it was the recent listing of several of their babies on the Neal Auction Company’s website that prompted this piece. The Heubach babies have particularly expressive faces with a degree of realism that other makers found hard to match.

There are two lots available in their Summer Auction (July 8th and 9th) both consisting of four babies. The guide price is $400/$600. For more information visit the Neal Auction Company’s website.

Why was a baby considered the figure of choice for this application, rather than an animal or even a vase? I’ve absolutely no idea – can anyone shed some light?

2 thoughts on “You know what a Baby Grand is… but what is a Piano Baby?”