Not all the pianos attributed to John Lennon were actually owned by him — but this decorated 1872 Broadwood upright certainly was. And it is on this piano that Lennon wrote much of the Sgt. Pepper’s Lonely Hearts Club Band album, as well as many other great songs. 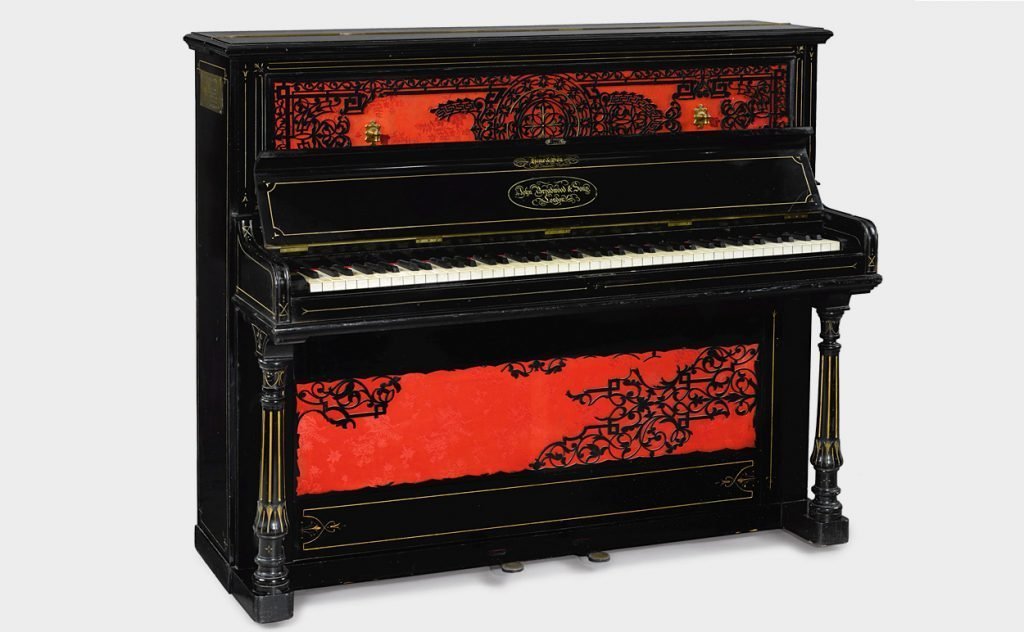 He purchased this Broadwood upright in 1966, the year before Sgt. Pepper’s release. He kept it on the ground floor in a small ante-room, and this was his go-to piano when writing. A second piano was housed in the attic with a collection of other musical instruments, but little is known about this one.

A third instrument, a Bechstein upright, can also be seen in photographs taken at Kenwood. This is supposedly the piano Lennon played at his aunt’s house as a child. Whilst at Kenwood it was meticulously decorated with psychedelic images by two Dutch artists, Marijke Koger and Simon Posthuma, a design collective known as “The Fool”. And as a result, It has become known as “The Fool” piano. It is now at George Harrison’s Friar Park Mansion.

Lennon’s Broadwood is described as a (Victorian) cottage upright piano — smaller than the standard cabinet upright. A tell-tale feature of the cottage piano is its tapered hexagonal legs, terminating with castors.

The John Broadwood & Sons inscription on the nameboard

The ebonised case is elaborately adorned with a gilt inlay, and the upper and lower front-boards feature ornate fretwork highlighted by scarlet backing cloths.

In 1968 Lennon moved to Tittenhurst Park, near Ascot (again south-west of London) with Yoko, and took the piano with him. There he remained for a further four years after which he and Yoko moved permanently to the States.

Prior to his departure, Lennon gifted the piano to an old friend, but before doing so he had a small brass plaque affixed towards the top of the bass-end side board. And it is this plaque that makes this piano truly special. It reads… 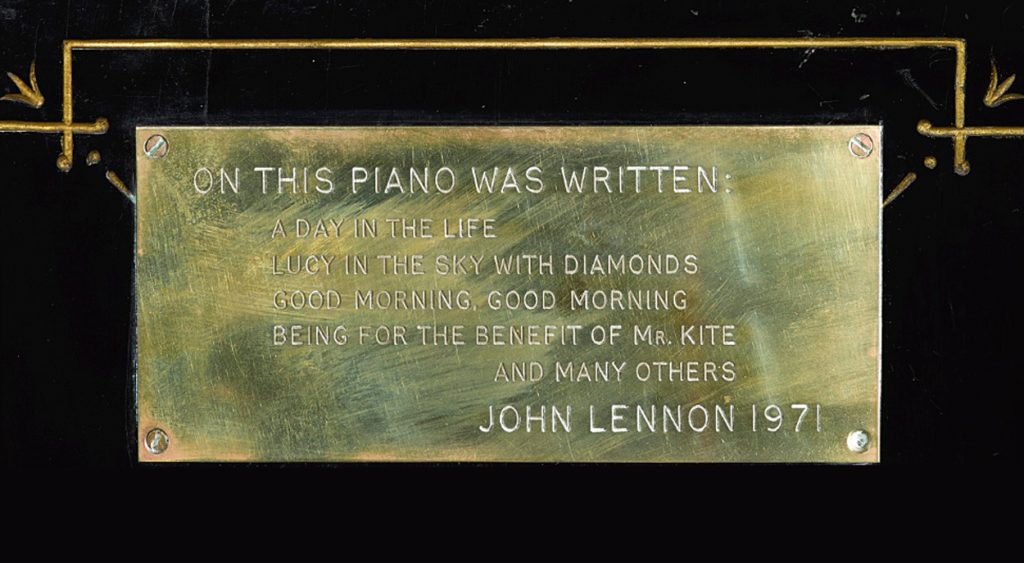 The company of John Broadwood & Sons was founded in 1728. It is the oldest and one of the most prestigious piano manufacturers in the world. And it has been granted a Royal Warrant by virtually every British monarch since its inception. Mozart, Haydn, Chopin, Beethoven and Liszt have all used Broadwood pianos at some time in their lives. The company started making cottage uprights in 1822.

Lennon’s Broadwood has subsequently appeared at auction on two previous occasions — at Sotheby’s in September 1983, and again in 2016, however it failed to sell.

Lennon’s Broadwood was auctioned at Sotheby’s in 1983 and again in 2016. On this latter occasion it failed to meet the reserve price.

More information can be found at GottaHaveRockandRoll.com.

The piano has now been sold for a total of USD 718,750.00. This includes a buyer’s premium of 25%. This figure is at the lower end of expectations.

The purchaser is Jim Irsay, owner of the Indianapolis Colts (American Football Team).