The challenge was to have 88 different pianists simultaneously play an acoustic piano. This would be a world record that could never be broken (pianos have 88 notes*). How was it done?

Twenty or so people can position themselves close enough to a piano’s keyboard to be able to play it, but 88? The only way to get this number of people around a piano is to position them several yards away, and then use some kind of finger extenders! 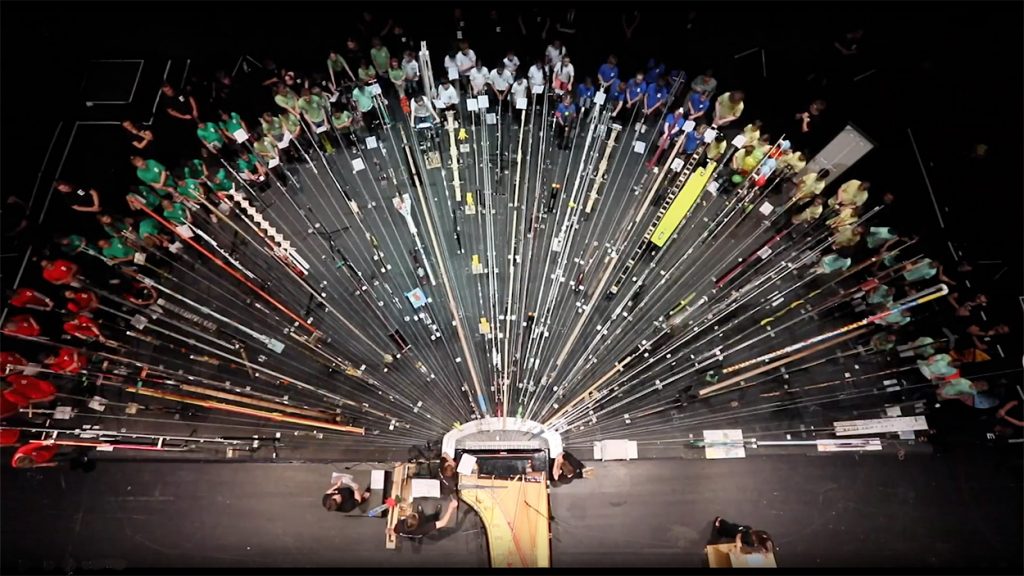 88 pianists playing one piano (from above)

The project, aptly titled 88 Pianists, was created by Professor Julian Allwood at the University of Cambridge Department of Engineering. And it was solved by inviting 2,500 primary school children aged between 7 and 10 to design 88 different mechanical fingers. 35 primary schools from across the UK were involved.

Pupils spent the last 12 months coming up with ideas. And these were subsequently built with the aid of various university engineering departments.

The mechanisms are quite amazing. They are all different, some up to seven meters long, and by necessity very thin. They include flying rabbits, giraffes, ballerinas and much more. Each “finger” has a name. These include, “The Mechanical See Saw Beanstalk“, “Banana Gun“, “Magnificent Mermaid Mechanism“, “The Bike Wacker“, “The Triple Wrecking Ball“, and there are 83 more here.

There is one additional mechanism “The Tubalicious Invention“. This remotely activate the sustain pedal by means of hydraulics and a set of blue ping-pong balls. 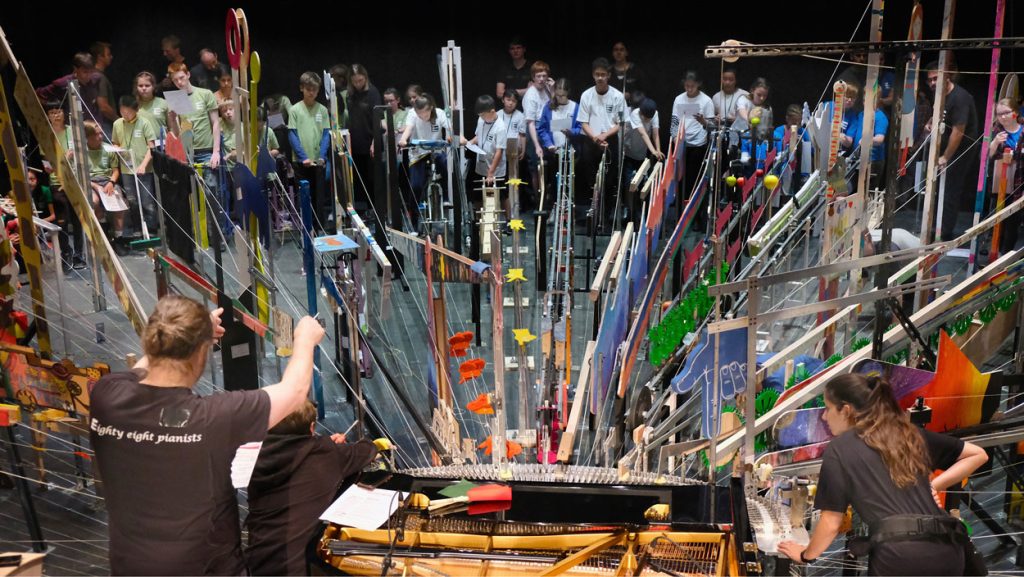 Some of the mechanical fingers as viewed from the piano

To break the world record, which previously stood at 30, the 88 pianists took part in a special concert at the opening of the General Assembly of the International Academy of Production Engineering (CIRP) at the ICC Birmingham on August 19th, 2019.

The various mechanical fingers were attached to a Steinway Model D Grand Piano. The ensemble played a piece called “Leomortal” by composer and keyboardist Martin Riley in front of over 500 leading engineers.

The project had originally been conceived to commemorate the 500th anniversary of the passing of Leonardo da Vinci. It was apposite to perform a piece about the great inventor using a remarkable and spectacular invention.

“This was a truly fantastic collaboration between engineering and music! The imagination of the children involved was astonishing and has to be seen to be believed. Royal Birmingham Conservatoire is so proud to have collaborated with ten UK Universities on this world record-breaking project which yet again proves music’s power to inspire children.”

88 Pianists sponsored by The Use Less Group at the University of Cambridge, The Engineering and Physical Sciences Research Council (EPSRC), CIRP UK, and The James Dyson Foundation. Teams from the Universities of Bath, Birmingham, Birmingham City, Bristol, Cambridge, Cranfield, Liverpool, Manchester, Nottingham, and Sheffield helped with the realisation of this project.