The GPX-F1 Facet Grand Piano won the Grand Prize in the Roland Digital Piano Design Awards back in 2015. This competition challenged product designers around the world to come up with a ground-breaking brand new… Read more »

It seems that “The Immortal Piano” is for sale on eBay with a “Buy It Now” price of $2 million. Over the years this unique instrument has also been called: “The Siena Piano”, “The King’s… Read more » 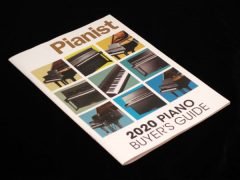 Pianist magazine has just published its 2020 Piano Buyer’s Guide. This annual work reviews a wide range of acoustic and digital pianos in a clear and simple format. The guide is split into three illustrated… Read more »

Several US music trade magazines announce their annual industry awards in December. So, as we reach the end of 2019, we take a look at the winners of this year’s various piano awards. The bias,… Read more »

Mexarts is a high-end Chinese furniture manufacturer, with a strong focus on contemporary design. And the company’s award-winning A Singing Desk concept takes the somewhat perfunctory looking digital piano and transforms it into beautiful and… Read more »

In 1942 piano teacher Harold Rhodes, then in the US Army Air Corps, developed a miniature piano for hospitalised soldiers to play. It was made from bits of old planes and became known as the… Read more »

Yamaha has unveiled its first comprehensive AI piano system. The Japanese musical instrument manufacturer has been working with artificial intelligence technology for many years, and the fruits of their labour were showcased at a recent… Read more »